During the second half of the nineteenth century the Westborough suburb of the Maidstone developed rapidly. Large houses sprang up along the London and Tonbridge Roads and in the Bower artisan cottages and villas spread into Fant Fields. The parish was served by St Peter’s Church.

St Peter’s began as the chapel of a hospital dedicated to SS Peter and Paul called the Newark of Maidstone. It was founded by Boniface, Archbishop of Canterbury (1244-1270) in 1260 for pilgrims crossing the river. In 1395 the hospital was merged with the new foundation of All Saints, Maidstone, although the hospital apparently retained some independence. It became redundant after the Reformation and was sold to Lord Cobham, and the chapel had various secular uses. In 1836 a local architect, Mr John Whichcord, began to restore and enlarged it. It opened in 1837 and was consecrated in 1839, gaining its own parish in 1840.

At this time the Church of England was in a period of vigorous growth and by the 1870s it was clear that St Peter’s was of inadequate size to meet the needs of the area. Furthermore, it lay at an extreme corner of its parish and the pews were rented which was a serious handicap for working people.

A group of prominent churchmen came together to address these problems and eventually the present site was obtained as a gift from Mr Frederick Scudamore of Manor House, a distinguished local solicitor and Under Sheriff of Kent.

At the meeting of the Building Committee on 8 February 1875, Mr Lewis Wigan of Oakwood proposed that the dedication of the new church be to “St Mary the Virgin.”  This had been the dedication of the ancient parish church of Maidstone until changed by Archbishop Courtney in 1395 when he established his collegiate church of All Saints.  While the motion was passed final decision was postponed until the following meeting as Mr Scudamore was not present.  At the following committee meeting on 22 February the decision was put on hold.

On 29 June 1875, Mr Scudamore proposed that the dedicated “shall be to the Honour and Glory of God under the name of St Michael and All Angels.”

Subscriptions for the new church began to come in including £10 from the Rev Canon Dr E B Pusey and £400 from the Earl of Romney.  In February 1875, George Naylor of Rochester was commission to build the church at an estimated cost of £9,930.  The nave, aisles and lower part of the tower would be built first and the remainder added as the funds became available.

Unfortunately, the staged construction approach would not allow the church to be consecrated because the altar would not be in its proper place; much of the funding was dependant on grants which would only be available when the church was consecrated.  The Building Committee requested the architect modify his design but instead he put forward his design for Christ Church, Epsom which had been completed in 1874.  The committee adopted this design and George Naylor presented a revised estimate:

At noon on St Michael’s day 1875 the Mayor, clergy, other dignitaries and a choir processed from Manor House to the half completed building where the foundation stone was laid by the Archbishop of Canterbury, Dr Archibald Campbell Tait.

A sealed bottle containing a parchment scroll with the names of the subscribers engraved on it together with the inscription “In the faith of Jesus Christ we place this foundation stone in the name of God the Father, God the Son and God the Holy Ghost Amen. Nisi Dominus Frustra everything is in vain without God,” was placed in a cavity below the foundation stone. 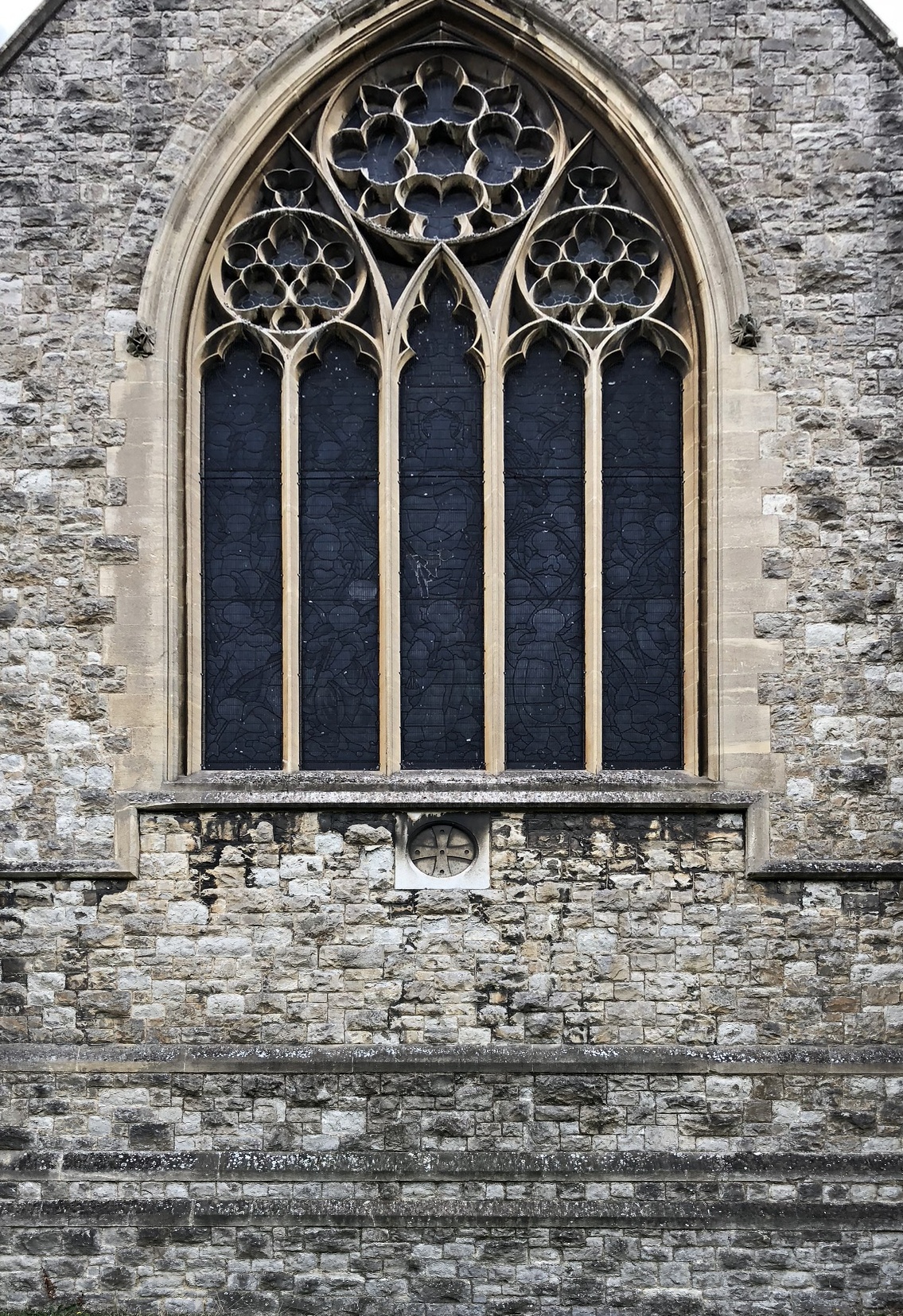 The foundation stone is shown in the photograph beneath the east window.

As construction progressed it became clear that the subscriptions would be insufficient to complete the south aisle and upper stage of the tower.  Mr Scudamore had already donated the site to the value of £1,000 and made a personal subscription of £105, generously subscribed the further £1,500 required which he raised by selling some of his land in the Fant area.  The other members of the committee subscribed to the tenor bell which was placed in the tower before consecration.  A tablet recording Mr Scudamore’s contribution was placed in the tower porch. 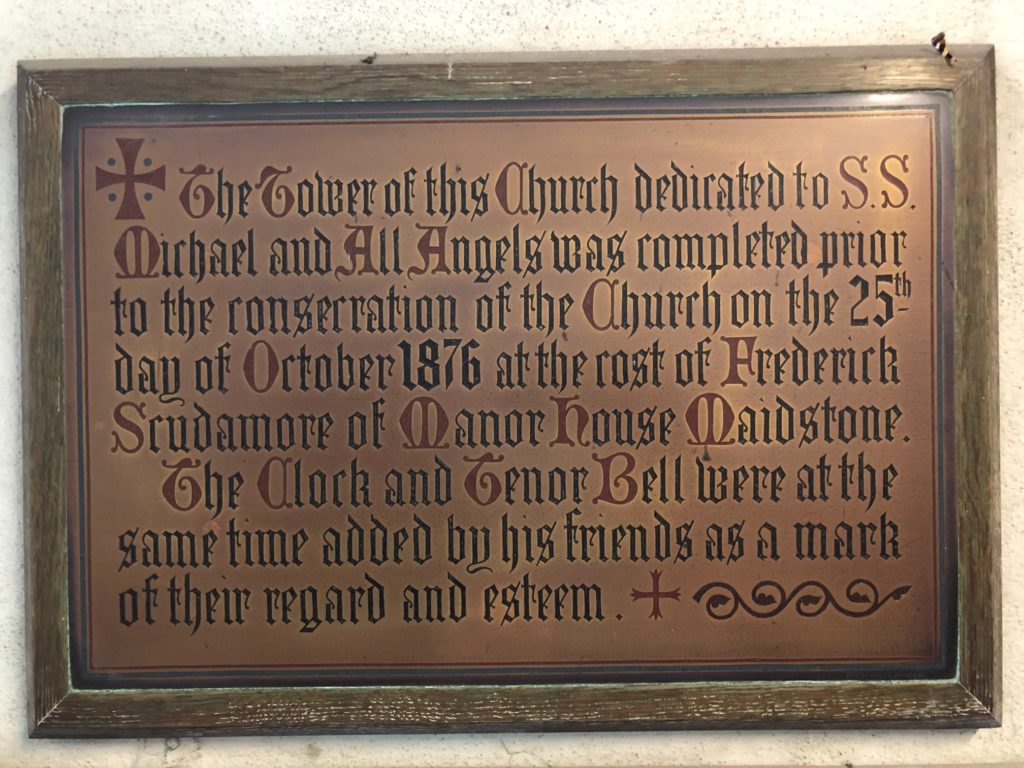 On Wednesday 25 October 1876, the Archbishop consecrated the church.  The service was attended by the Vicar of St Peter’s, the Rev H.D. French and the Vicar of the new parish, Rev Edward Buckmaster.  The Gospel was read during the service by the Bishop of Brisbane.  Following the service a lunch was held for approximately 150 guests.  Mr Scudamore said that it gave him “extreme satisfaction to witness the consecration of St Michael and All Angels.”